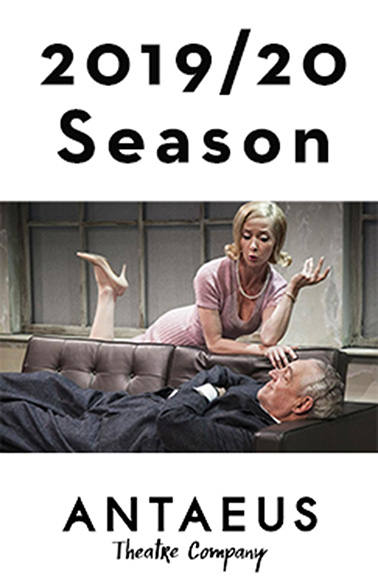 GLENDALE, Calif. (June 3, 2019) — Best known for its productions of classical theater, Antaeus Theatre Company will try something different in 2019-20, kicking off the season at the Kiki & David Gindler Performing Arts Center in Glendale with two new plays that will run in repertory this fall, then following up with two classical works in 2020.

Although Antaeus has presented new work in the past, including Native Son which was recently remounted by Center Theatre Group as part of Block Party at the Kirk Douglas Theatre, this is the first time the company will offer full productions of plays developed in its Antaeus Playwrights Lab.

Opening the season is the West Coast premiere of The Abuelas by Stephanie Alison Walker, followed a few weeks later by the world premiere of Eight Nights by Jennifer Maisel. The two plays will perform in repertory, sharing a single set.

“Being able to present plays that were developed right here in our library is a thrilling prospect,” note co-artistic directors Bill Brochtrup and Kitty Swink. “The Playwrights Lab, which meets weekly to help playwrights create new works with our actors reading fresh pages, has become an integral part of our organization. These two plays in particular struck us as being ‘Antaeus’ shows, having the kind of epic scope, historical sweep and largeness of theme that is our hallmark.”

The New Year will see productions of Shakespeare’s Measure for Measure, running February through April, and The Time of Your Life by William Saroyan taking the June through August slot.

According to Brochtrup and Swink, “All the plays in the season speak to questions of identity —— Who are we? What are our values? What matters to us as individuals, as families, as communities and as a society? We’re eager to dig deeply into those themes, continuing to spark the kinds of vital conversations we know great theater can engender.”

Oct. 11 through Nov. 25, 2019 (previews begin Oct. 3):
West Coast premiere of The Abuelas — A surprise visit from two strangers exposes a devastating secret in Stephanie Alison Walker’s visceral look at the repercussions of Argentina’s so-called “Dirty War.” Developed in the Antaeus Playwrights Lab, this exciting new play explores the heart’s capacity for forgiveness — even in the face of the harshest betrayal. Directed by Andi Chapman.

Nov. 8 through Dec. 16, 2019 (previews begin Oct. 31):
World premiere of Eight Nights — A heartfelt, lyrical portrait of a German Jewish refugee haunted by her past, but resiliently moving toward the future. Set during the eight nights of Chanukah, and spanning eight decades of the protagonist’s life, Jennifer Maisel’s play gracefully weaves together heart-aching moments with dark yet life-affirming humor. Developed in the Antaeus Playwrights Lab. Directed by Emily Chase.

Feb. 21 through April 20, 2020 (previews begin Feb. 13):
Measure for Measure — Sex and hypocrisy abound in William Shakespeare’s dark comedy about the corruption of power and authority, and the true nature of love and justice. This world is familiar: sex is a commodity, government is subject to the leader’s moral whimsy, and extreme liberality goes head to head with emergency powers to constrain and punish. Co-directed by Ann Noble and Armin Shimerman.

June 26 through Aug. 10, 2020 (previews begin June 18):
The Time of Your Life — Set in a seedy San Francisco bar and filled with a diverse and eccentric cast of desperate outsiders, William Saroyan’s optimistic 1939 masterpiece is a true ensemble piece with an uplifting message of kindness and hope. An icon of American theater and one of the playwright’s favorites, it was the first play ever to win both the Pulitzer Prize and the New York Critics Circle award. Directed by Jennifer Chang.

In addition to these fully staged productions, Antaeus is excited to continue programming in its Black Box space. Lab Results: The Antaeus Playwrights Lab Festival will feature six new plays chosen from the Lab for two readings each over the course of two weekends in January, and Classic Sundays will continue monthly staged readings of material curated by company members.

Antaeus is an actor-driven theater company that explores and produces timely and timeless works, grounded in our passion for the classics. We illuminate diverse human experiences through performance, training and outreach. We believe in the transformative power of live theater.

The Kiki & David Gindler Performing Arts Center complements Glendale’s ongoing commitment to integrate vibrant arts space into the fabric of city life, ensuring the arts remain accessible to all. Located just a few blocks away from The Americana at Brand and the remodeled Glendale Central Library as well as the Alex Theatre, the center promises to build upon Glendale’s growing reputation as an arts and entertainment destination. The center includes an 80-seat theater, a reconfigurable 36-seat performance/classroom space, and a theater classics library.

For more information about Antaeus Theatre Company, call 818-506-5436 or visit online at www.antaeus.org.