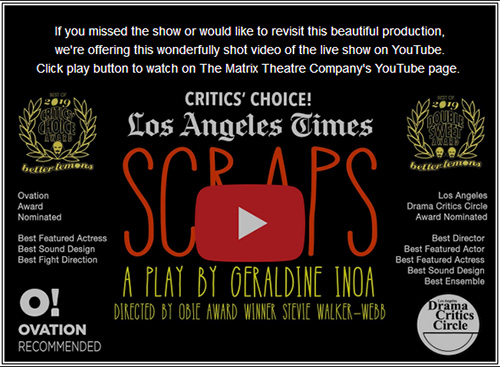 A provocative mash up of poetry, realism and expressionism, Scraps boldly chronicles how the family and friends of a black teenager shot by a white police officer struggle to cope in the aftermath.

In 2009, following more than three decades of producing multiple award-winning work for the stage, Matrix Theatre Company founder/artistic director Stern resolved to redirect the company’s focus to the exploration of race issues in contemporary society. Since then, the Matrix has offered up critically acclaimed productions of Lydia Diamond’s Stick Fly, set in the Martha’s Vineyard summer home of an upper middle class African American family; Neighbors, the highly provocative study of the history of racism in America by then-unknown playwright Branden Jacobs-Jenkins, who has since gone on to win two Obie awards and a MacArthur “genius” grant; a non-traditional. multi-culturally cast production of All My Sons by Arthur Miller; the West Coast premiere of We Are Proud to Present a Presentation About the Herero of Namibia, Formerly Known as South-West Africa, From the German Sudwestafrika, Between the Years 1884-1915 by Jackie Sibblies Drury, who went on to receive the 2019 Pulitzer Prize for Drama; and the Los Angeles premiere of The Mountaintop by Katori Hall, in an acclaimed production directed by Roger Guenveur Smith.