Deirdre Lyons in ‘The Under Presents: Tempest’

Live, immersive theatrical experience can be viewed
from home with virtual reality headset 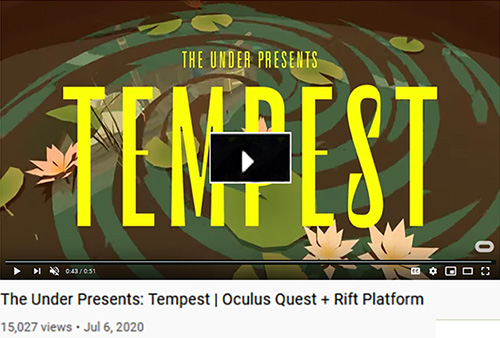 LOS ANGELES (July 22, 2020) — Actor Deirdre V. Lyons has assumed the role of “Prospero” in the live, immersive theatrical production of The Under Presents: Tempest, available for viewing with an Oculus virtual reality headset on Oculus Quest and Oculus Rift, now through Sept. 30.

“Virtual reality is part of the future of storytelling, and this production gives a great example for how VR and live theater can successfully come together,” says Lyons. “During this time of social distancing, VR is emerging as an alternate way for audiences to experience live theater.”

The Under Presents: Tempest is a creation of award-winning art and games studio Tender Claws: a cross between an immersive theatrical experience led by live professional actors and VR gaming. Audiences perform magic with Prospero, and together they create a timeless tale of love and revenge. An interactive re-imagining loosely based on Shakespeare’s The Tempest, the experience lasts approximately 40 minutes.

A recent article in The New York Times calls The Under Presents: Tempest “a technological first: a live, scripted, participatory play that you attend, from home, using a virtual reality headset… live actors and live audience members meeting in a shared space at precisely timed intervals… A live actor leads you and six or seven other audience members to a firepit in the Hollywood Hills, then to Prospero’s island, then back to the firepit for marshmallows and a dance party.”

Lyons is one of 11 actors who rotate in the role of Prospero.

“All our shows are a bit different,” she explains. “We start from a script, but then we personalize it. So that makes it fun for multiple returns.” 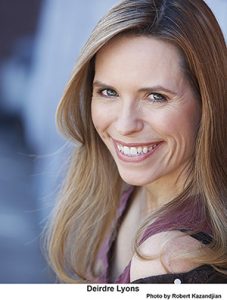 Best known for her work in immersive productions, Lyons was part of the original cast of JFI Productions’ The Willows, which enjoyed three remounts due to its popularity as well as a virtual reality experience on the Oculus platform. She also appeared in Freakin’ Weekend, a VR film from Amaze Productions. Other immersive projects include Creep LA shows Entry, Lore, Awake and Haus of Creep. She appeared as the “Lost Princess” in the final chapter of Speakeasy Societies Kansas Collection, and with a Spy Brunch weekend event entitled Cold War Lounge. She has participated in multiple activations, including one-night launch events for the movies Ma and Birds of Prey. She appeared at Comic-Con promoting Sacred Lies and AHS 1984. Showing an aptitude for performance from the age of three, Deirdre began her training and onstage career in the Pacific Northwest prior to her relocation to Los Angeles. In L.A., she formed T.H. Espian Productions with her partner Stephen Butchko. Their first production was the Los Angeles premiere of Escher’s Hands, a dramatic work by Dawson Nichols that played for a six-week run at the Lillian Theater. The two went on to produce and perform in the award-winning short film Katrina; a web series called The Fantasy State; a documentary; and the critically acclaimed short film Good Behavior, which won Best Short Film at the Temecula Film Festival.

In his review for Horror Buzz, Jeff Heimbuch wrote, “Fantastic… Deirdre took us to different virtual worlds, telling the story of Tempest with her own flair… As a fan of immersive theater (something I have been missing very much during this [pandemic]), Tempest is exactly the at-home immersive experience we need right now. It reminded me of some of my favorite shows I have seen in person, but the virtual platform made it much easier to get lost in the fantastical world that Deirdre painted for us.”

Deirdre Lyons stars as Prospero every Monday and Wednesday.

Tickets can be purchased in advance, with a handful of day-of tickets available on a first-come, first-served basis. Tickets are $14.99, available at the Oculus in-app box office, and include permanent access to The Under multiplayer space. An Oculus Quest or Oculus Rift VR headset is required to view the show. For more information, go to https://tenderclaws.com/tempest. A promo trailer can be viewed at https://www.youtube.com/watch?v=w4cMDpSuRjk.