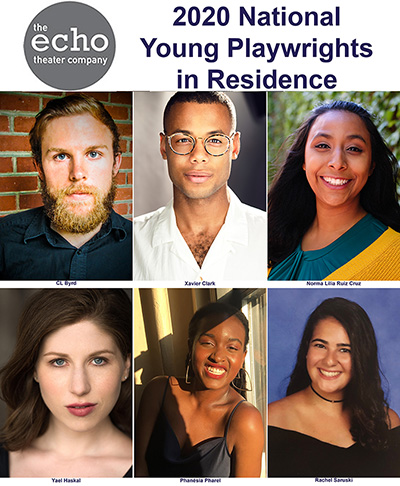 LOS ANGELES (May 4, 2020) — Long recognized for its dedication to creating new work for the theater, Los Angeles-based Echo Theater Company is uniquely positioned to nurture the next generation of playwrights during the current public health crisis. The Echo has been using digital platforms to connect young playwrights with professional mentors since 2018 through its “National Young Playwrights in Residence” program. Six young playwrights, ages 19 -26, have been selected to participate in the third annual, 2020 program.

“The original idea was to develop an option for kids with talent and potential whose ability to further a writing career was limited by geography or finances,” explains Echo Theater artistic director Chris Fields. “Now, given the current situation, all the tools are already in place.”

“This program ensures that new voices from all across the country are getting a chance to be heard,” says Echo director of new programming Andrew Shafer. “It offers a transformative way for new writers to fearlessly create bold new work with the support of a professional artistic community.”

Selected from over 200 applicants, this year’s crop of young playwrights includes six bold, original voices that represent a diversity of experiences and backgrounds. Each will be paired in a mentorship with an established professional writer, working together to develop a new work via video chat and voice calls. The company will fly all six to Los Angeles to rehearse and present a festival of staged readings of the final works.

CL Byrd, age 26, is from High Point, NC, where he received his AA degree from Guilford Technical Community College and is currently employed as an “essential worker” at Drum Filter Media Inc., running the machines that make materials for drum filter bags. But his real passion is the theater. He started writing plays while in college for his own personal enjoyment, then submitted one to an online publishing website — which resulted in several productions. As of today, his plays have been performed in the United States, South Africa, Australia and Costa Rica. CL will be mentored by playwright/screenwriter Mike Batistick, author of three Off-Broadway plays: Chicken, Port Authority Throw Down and Ponies. Ponies was designated a New York Times Critics’ Pick when it was released as a film in 2012. In television, Mike has written for The Affair, The Americans (WGA Nomination), Mr. Mercedes and Chicago PD on NBC. Other plays include Bodega Lung Fat (Public Theater New Work Now), Tempo (Steppenwolf First Look) and Flag (Hangar Theater workshop in Ithaca, NY). Commissioned by the Atlantic Theater, he has developed plays with the Cape Cod Theater Project, Ars Nova Play Group, and MCC’s Playwrights’ Coalition. A graduate of Juilliard’s writing program, his plays are available through Dramatists Play Service.

Xavier Clark, age 25, is a multidisciplinary theater artist who grew up in Turkey, raised by a West African father and a Turkish, Muslim mother. He earned his BFA at NYU’s Tisch School of the Arts and his MFA at UC San Diego. To aid Xavier in his quest to write stories that deal with the intersection of race, queerness and religion in innovative ways, he will be paired with Los Angeles-based playwright Boni B. Alvarez. The Echo produced the world premiere of Alvarez’s play, Fixed, which earned four Scenie Awards including “Outstanding Production of a Comedy-Drama” and “Outstanding Ensemble.” His other plays, which include Emmylu, America Adjacent, Bloodletting, Nicky, Dallas Non-Stop, Dusty de los Santos, Driven, Refuge for a Purple Heart and Ruby, Tragically Rotund, have been produced by companies including Center Theatre Group, Coeurage Theatre Company, Skylight Theatre, Theatre Rhinoceros and Playwrights’ Arena. Alvarez is an alum of the CTG Writers’ Workshop, Echo Writer’s Lab, Humanitas Play LA, Moving Arts’ MADlab, and the CBS Writers Mentoring Program. He is currently in Skylight Theatre’s Skylab, the Geffen Playhouse Writers’ Room and a Resident Playwright of New Dramatists.

Norma Lilia Ruiz Cruz, age 22 and a senior at the University of Oklahoma, grew up in Tijuana Mexico; she uses playwriting to explore her Mexican identity, comparing it to the culture of the United States. Norma will team up with Bernardo Cubría, whose recent play, The Giant Void In My Soul, earned him Ovation, Stage Raw and Los Angeles Drama Critics Circle nominations for best playwright. Following its world premiere production by L.A.’s Ammunition Theatre Company, Giant Void is scheduled to be produced in 2021 at Stages Repertory Theatre in Houston, Texas and at Foro Shakespeare in Mexico City. Bernardo co-wrote the short film Spanish Class, which won “Best Comedy” at the NBC Universal Shorts Awards in 2018. His play Neighbors: A Fair Trade Agreement was a semi-finalist for the O’Neil in 2017. It received its world premiere at INTAR in NYC in the fall of 2017 and its South East premiere at the Studio Theatre in Florida in December, 2019. His play The Judgment of Fools has received three critically acclaimed productions in NYC, L.A. and Houston. He is currently working on a screenplay with Gina Rodriguez for her company, I Can and I Will Productions.

Yael Haskal, age 23, grew up all along the East Coast and is currently based in New York City after graduating from Vassar College last year. Her work has been performed at New York’s La MaMa Experimental Theatre Club, Dixon Place, IRT, the Tank, Kraine Theater and the Midtown International Theatre Festival; at the Ivoryton Playhouse, Trinity College and the Warner Theatre in Connecticut; at Theatre Simpson in Indiana; at the InspiraTO Festival in Toronto, Canada; and at other venues across the U.S. She is the creator of the comedic webseries Fun Moms and an ensemble member of the New York Neo-Futurists. Yael’s NYPR mentor will be playwright Dominic Finocchiaro, whose play The Found Dog Ribbon Dance was produced by the Echo as part of its Ovation Award-nominated 2017 “Best Season.” His other full-length plays include angel’s share, brother brother, brut, complex, Gold Person, how it feels to fall from the sky, The Lucky Ladies, mother’s son and Trees in their youth. His writing has been produced and developed around the country, including with Roundabout Theatre, the New Group, Actors Theatre of Louisville, the Civilians, Clubbed Thumb, the Lark Play Development Center, the National New Play Network, Portland Center Stage, the Flea Theater, the Kennedy Center, PlayPenn, Seven Devils Playwrights Conference, Dixon Place, and the Amoralists. MacDowell and UCross Fellow. BA Reed College, MFA Columbia University, Lila Acheson Wallace Fellow at the Juilliard School.

Phanésia Pharel, a first-generation Haitian American woman from Miami, is 20 years old and a junior at Barnard College where she majors in Urban Studies. Her plays, which explore themes of black girlhood and generational trauma and healing within the black and Latin American diaspora, have been developed in collaboration with organizations including the Los Angeles Queer New Works Festival (upcoming), the Conch Shell reading series, Liberation Theatre Company and New York’s Latinx Playwrights Circle. Published works include My Kid, My Life (2015 City Theatre Anthology) and Penelope (Dramatics Magazine, Samuel French Publishing). Awards: 2016 Micro Theater Miami “Best Of The Best,” 2017 Blank Stage Young Playwrights Festival “Honorable Mention” and the 2019 Brandt Playwriting Award. Phanésia will be working with Chaira Atik, whose play, Poor Clare, was set to receive its world premiere at the Echo the same night the theater was shuttered due to Covid-19. Chiara’s other plays include: Five Times in One Night, BUMP and WOMEN, which is a mashup of Louisa May Alcott’s “Little Women” and HBO’s “Girls.” Chiara’s work has been developed at New York Theater Workshop, Clubbed Thumb/Playwrights Horizons Superlab, Williamstown, Northern Stage and Colt Coeur. Other writing credits include “Paris is Lovely/Lonely When You’re Alone” (Amazon Kindle) and “Modern Dating: A Field Guide,” (Harlequin, 2013). Her feature film script, Fairy Godmother, was on the 2016 Black List. Chiara is a member of the Ensemble Studio Theater and an alum of EST’s Youngblood.

Rachel Saruski is the 19-year-old granddaughter of Cuban refugees. She graduated from Miami Beach Senior High School last year, where she received multiple awards and honors for writing, directing and performing, culminating with the 2019 Carole Taran Award for Excellence in Performing Arts. Currently a freshman at Sarah Lawrence College studying theater and literature, she has recently completed a full-length play about her Hispanic-Jewish family and life with two special needs brothers. Rachel’s mentor will be Kira Obolensky, whose plays have been produced off-Broadway, in Los Angeles, in Prague and Terezin, and in such locations as homeless shelters, prisons, tribal colleges, chemical dependency centers and immigrant centers. She has received awards and fellowships for her work, including the Kesselring Prize, a Guggenheim Fellowship and, most recently, a Mellon Foundation National Playwright Fellowship, which put her in residence with the award-winning theater Ten Thousand Things for six years. She has created a theater program in a maximum security prison and worked in an interdisciplinary way with scientists and with business people through an innovative organization called The Gymnasium. She has co-written a national bestseller about architecture called “The Not So Big House,” lectured extensively on her work “Imagining the redistribution of the wealth of theater,” and recently worked with Pandies Theater in New Delhi, India on a tour of their production of Medea.  Her novella “The Anarchists Float to St. Louise” won Quarterly West’s Novella prize. She attended Juilliard’s Playwriting Program, Williams College and is a core writer at the Playwrights’ Center in Minneapolis

Founded in 1997 and dedicated to producing new work, the Echo Theater Company has gained a reputation for bringing the hottest new plays and playwrights to Los Angeles. Echo’s 2019 production of The Wolves by Sarah DeLappe was named “Best of 2019” by .both the Los Angeles Times and radio station KCRW, and was the recipient of two Los Angeles Drama Critics Circle awards; the world premiere of Handjob by Erik Patterson made the “Highlights of 2019” list at LA Observed. The 2018 season saw West Coast premieres of Branden Jacobs-Jenkins’ Pulitzer Prize finalist play Gloria, named to the Los Angeles Times’ “Best of 2018” list, and Molly Smith Metzler’s Cry It Out, winner of both Los Angeles Drama Critic’s Circle and Ovation “Best Production” and “Playwriting” awards, and listed on KCRW’s “Best of 2018” list. In addition, the Echo was honored with the LADCC award for “Best 2018 Season.” The company was anointed “Best Bet for Ballsy Original Plays” by the LA Weekly in its 2014 Best of L.A. issue and was a recipient of a 2016 “Kilroy Cake Drop”— one of only 13 theaters in the country to be surprised by cakes to honor the efforts they are making to produce women and trans writers. In the Los Angeles Times, theater critic Charles McNulty wrote, “Echo Theater Company, which has cultivated a community of top flight actors, would be my go-to place in Los Angeles for symbiotic ensemble acting… Artistic directors of theaters of all sizes would be wise to follow the [lead] of the Echo’s Chris Fields, who [is] building audience communities eager for the challenge of path-breaking plays.” KCRW’s Anthony Byrnes stated, “Echo Theater Company is on a fierce journey. They’re choosing plays that are consistently challenging and all have a deep conscience… The body of work that Echo is building is substantial. If you wanted to pick one small theater to add to your cultural roster — Echo is a consistent favorite.”

For more information about the Echo Theater Company and the National Young Playwrights in Residence program, visit www.echotheatercompany.com.