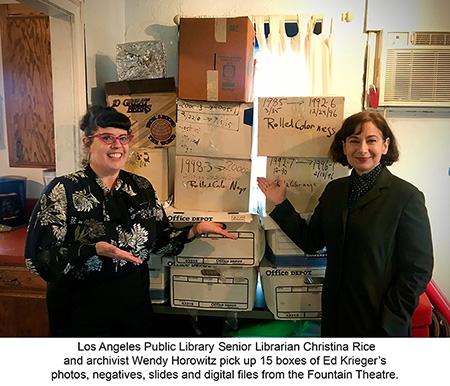 LOS ANGELES (December 7, 2022) — Photographer Ed Krieger captured hundreds of L.A. theater productions over the course of 40 years before his death on December 16, 2020. Now, the Fountain Theatre has arranged for his large collection of photos, negatives, slides and digital files to be permanently housed at the Central Library in downtown Los Angeles, where it will be archived as part of the library’s Photography Special Collections.

“The Los Angeles Public Library is honored to be chosen as the custodian of Ed Krieger’s photographic archive documenting almost 40 years of local theater,” says Senior Librarian Christina Rice, who manages LAPL’s photo collections. “This collection will be an incredible supplement to our theater photos from the Herald Examiner newspaper image archive, and builds on the incredible wealth of materials in our Literature and Fiction Department which chronicles Los Angeles theater productions from the late 19th century to the present. We’re excited to be a go-to source for local theater research.”

Krieger’s children, Will Krieger and Courtnay Krieger, said in a statement, “We thank the Los Angeles Public Library for archiving our father’s work. We are happy to know that his photography will be preserved for the future and shared with others.”