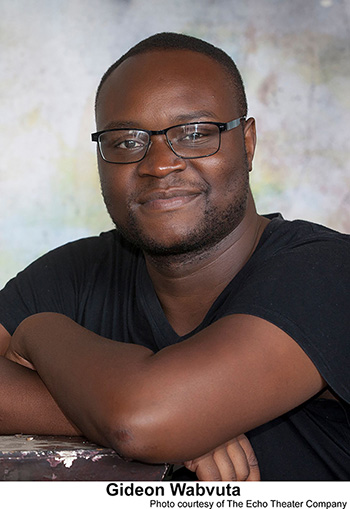 LOS ANGELES (Sept. 29, 2020) — L.A.’s Echo Theater Company is bringing Gideon Wabvuta into the fold. A playwright and teaching artist currently living in Los Angeles but originally from Zimbabwe, Wbatuva will join the staff as literary manager.

The Echo is dedicated to creating new work, so the literary manager position is key. Responsibilities include soliciting, reading and evaluating scripts; casting weekly in-house readings; working with the artistic and associate artistic directors to determine programming and recommend plays for advancement towards production; and the ongoing organization and archiving of script files.

“Gideon has a voracious appetite for new plays and a desire to contribute to the artistic process from the ground up,” says Echo artistic director Chris Fields. “He has a finger on the pulse of the theater community, both in Los Angeles and nationally, and is committed to promoting diversity, equity and the inclusion of underrepresented voices.”

Wabvuta earned his MFA from USC’s dramatic writing program in 2019. His work as a writer includes Family Riots, Master’s Shoe and a solo show, Mbare Dreams, among others. He has taught writing in the U.S., U.K., South Africa, Zimbabwe and more. His work in theater includes previous stints as a program director and play reader, and he currently works as a consultant and researcher for TV shows in development. Gideon’s artistic goal is to create works of art that will reclaim and reframe the African narrative on the world stage.

Founded in 1997, the Echo Theater Company has gained a reputation for producing and developing exciting new work. NPR affiliate KCRW 89.9 FM recently declared that “Echo Theater Company is on a fierce journey,” and Stage and Cinema calls the Echo “hands-down the most continuously innovative theater company in L.A.” The Echo has won countless Los Angeles Drama Critics Circle, Ovation, LA Weekly and Stage Raw awards, and is frequently cited on end-of-the-year “Best of Lists” including by the Los Angeles Times, LA Observed and KCRW, among others. The company was anointed “Best Bet for Ballsy Original Plays” by the LA Weekly and was a recipient of a “Kilroy Cake Drop” to honor its efforts to produce women and trans writers. Los Angeles Times theater critic Charles McNulty wrote, “Artistic directors of theaters of all sizes would be wise to follow the [lead] of the Echo’s Chris Fields, who [is] building audience communities eager for the challenge of path-breaking plays.”

For more information about the Echo Theater Company, visit www.echotheatercompany.com.