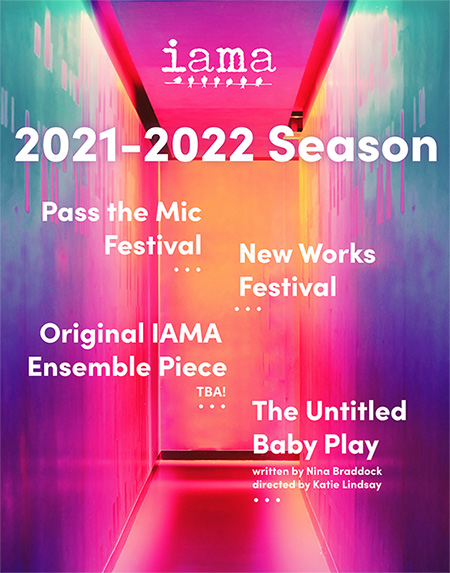 Dedicated to pushing boundaries, IAMA continues to explore the new digital medium even as it returns to the physical theater. The season kicks off with a virtual event before moving back to the boards with three in-person events (venues to be announced at a later date). Three special collaborations round out the season.

Nov. 11 through 14 will see the company’s return to in-person performance with its New Works Festival. Six new plays will be presented over the course of one weekend in this annual series. All readings will be free and open to the public.

From February 24 through March 13 IAMA will present an ensemble-devised work-in-progress, an exciting new play written, performed and directed entirely by members of the IAMA ensemble. Stay tuned for more information.

Finally, opening May 26 and running through June 27, the world premiere of The Untitled Baby Play is an ode to female friendship. In this new, IAMA-developed play by Nina Braddock, six women find themselves trapped on an email chain as they plan a friend’s baby shower. What starts out as a comedy of manners for the digital age deepens into something weightier as these women — a doctor, freelance journalist, consultant, teacher, actress and software engineer — contend with cyber miscommunications and email thread snubs, forcing them to question their own convictions, fears and existential angst surrounding the baby issue. Directed by Katie Lindsay.

In addition, IAMA is thrilled to be part of three special collaborations with other companies:

From Sept. 22 through Oct. 20, Center Theatre Group will stream a remount of IAMA’s 2019 world premiere of Canyon by Jonathan Caren, originally produced by IAMA in association with Latino Theater Company at the Los Angeles Theatre Center. Selected by CTG for its 2020 Block Party at the Kirk Douglas Theatre, the play was instead filmed on the KDT stage for online streaming due to the pandemic. Exploring gender, citizenship and the cost of the American Dream, Canyon is the story of a seemingly progressive 30-something married couple and the Mexican father and son they’ve hired to renovate a deck. When an unpredictable accident occurs, the lives of both families are changed forever. The Los Angeles Times named Canyon a “Critic’s Choice,” calling it “[a] sharply observed and suspenseful new dark comedy.” The original production was directed by Whitney White; Colleen Labella directs for CTG’s digital stage.

Earlier this year, IAMA joined forces with Washington DC’s Woolly Mammoth Theatre Company to stream Ryan J. Haddad’s Hi, Are You Single about a gay man with cerebral palsy and his search for sex and romance. In March 2022, Woolly Mammoth will bring the world premiere of Haddad’s autobiographical tale to a live, in-person audience, again in association with IAMA. Laura Savia directs.

Lastly, in April, IAMA will present a special pre-festival engagement of two solo plays, both written and performed by IAMA ensemble members, before they head out to the 2022 Edinburgh Theatre Festival. Drew Droege will again direct Making Friends, a “gaytastic” comic solo play written and performed by quick-witted and self-confessed rage-aholic Tom DeTrinis; Making Friends received its virtual premiere courtesy of IAMA last season, with the Los Angeles Times calling the actor “a gifted, fearless, bawdy raconteur in the choleric model.” Homebrew is a dark, Southern comedy written and performed by Melissa Stephens and directed by Deanna Cheng. “Home is where the hurt is.”

“Our work has just begun,” states artistic director Stefanie Black. “We believe it’s our responsibility, as theater-makers, to find a balance between storytelling that honors the moment and ensuring space for an equitable future. IAMA continues to focus on developing new voices, as well as on a new educational platform to help train future theater-makers and leaders. We hope to match our external output of content with our internal input of education, training and a firm dedication to the dismantling of White supremacy and oppressive barriers that have long been a part of the American theater.”

Founded in 2007, IAMA is a Los Angeles-based ensemble of artists committed to the creation and cultivation of new voices and artists that challenge boundaries and take risks, while fostering an inclusive community that inspires theater-makers of future generations. IAMA is invested in the immediacy of production and strives to bring audiences out of their personal space and into a shared authentic experience. Los Angeles is one of the most diverse metropolitan areas in the world and IAMA’s work reflects the new voices and changing attitudes that continue to shape this city, state, country and world. Designated by Playbill as “one of 20 regional houses every theater lover must know,” the award-winning company has seen many plays generated at IAMA travel to off-Broadway, including to Second Stage and Playwrights Horizons, then go on to be performed regionally and internationally. IAMA members have been featured in numerous critically acclaimed TV shows and films as well as in a vast array of theater and live performances on and off-Broadway and across the country. IAMA has been dedicated to developing new plays and musicals by emerging and established playwrights, culminating in over 25 world, West Coast and Los Angeles premieres.