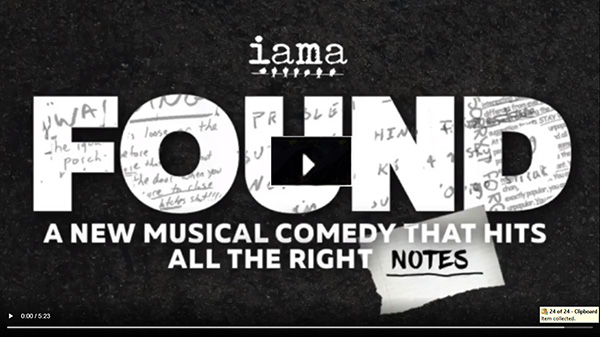 LOS ANGELES (April 8, 2020) — IAMA Theatre Company via @TheatreWithoutTheater has released a video clip from its critically acclaimed West Coast premiere of Found: A New Musical, which was forced to close mid-run due to the current public health crisis. Theatre Without Theater is a nightly theatrical broadcast (via Instagram) aiming to fill the current artistic void at curtain time.

Inspired by Davy Rothbart’s popular Found magazine, the musical features scores of actual discarded notes and letters that have been “found” in the real world by everyday people. The action takes place in a Chicago bar, where “Davy” (played by Jonah Platt) shares his finds with the patrons in an open-mic format that would later, in real life, tour to bars and bookstores across the country and come to be featured in The New York Times, The New Yorker, and on NPR’s All Thing’s Considered and This American Life, among others. The musical sets many of these actual notes to song, performed with raucous enthusiasm in the IAMA production by Platt and the rest of the ensemble: Jordan Kai Burnett, Sheila Carrasco, Parvesh Cheena, Desi Dennis-Dylan, Tom DeTrinis, Zehra Fazal, Ryan Garcia, Mike Millan and Karla Mosley.

To view Jonah and the cast perform “Pi Shop,” one of the musical numbers created from real-life found notes, go to https://www.instagram.com/tv/B-ih0McJruq/?igshid=3pazd5n06uns.

Found is written by Hunter Bell and Lee Overtree (book) and Eli Bolin (music and original lyrics) The IAMA production was directed by Moritz von Stuelpnagel. Music direction, arrangements and orchestrations were by Frank Galgano and Matt Castle; and choreography was by Crazy Ex-Girlfriend’s Kathryn Burns.