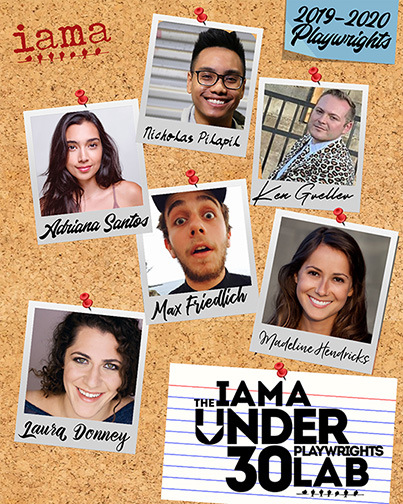 LOS ANGELES (Sept. 17, 2019) — IAMA Theatre Company has invited six up-and-coming Los Angeles playwrights to participate in its newly minted “Under 30 Playwrights Lab.” The inaugural group includes Laura Donney, Max Friedlich, Ken Greller, Madeline Hendricks, Nicholas Pilapil and Adriana Santos, each of whom will be in residence at IAMA for the entire 2019-20 season.

“In this, the program’s inaugural year, IAMA continues its mission of fostering young, hip, and modern storytelling by supporting a group of six emerging playwrights under the age of 30,” says Stefanie Black, the company’s co-artistic director along with Katie Lowes. “IAMA has been dedicated to developing new plays and musicals since 2007. With the Under 30 Playwrights Lab, we offer an artistic home for the next generation of L.A.-based playwrights.”

Over the course of the year-long residency, the writers will meet on a monthly basis to share and develop their work in a peer-guided format led by Under 30’s Max Friedlich. Members of the Lab will be also given dramaturgical support from the artistic and literary staff at IAMA, as well as a ticket to each of IAMA’s mainstage productions. The Lab will culminate in either a reading or workshop of each member’s work.

Designated by Playbill as “one of 20 regional houses every theater lover must know,” IAMA Theatre Company is a Los Angeles-based ensemble of artists committed to invigorating live performance for a streaming generation. Through cutting-edge, cool and hyper-modern stories, IAMA is invested in the immediacy of production and strives to bring audiences out of their personal space and into a shared experience. Since its founding in 2007, the Ovation Award winning company has seen many plays generated at IAMA travel to off-Broadway, Second Stage and the Roundabout Underground, then go on to be performed regionally and internationally. IAMA members have been featured in numerous critically acclaimed TV shows and films as well as in a vast array of theater and live performances all over the country; last fall, IAMA co-artistic director Katie Lowes and her husband, founding IAMA company member Adam Shapiro, made their Broadway debuts in Waitress. In 2017, TV producer and creator Shonda Rhimes announced that she would become IAMA’s first-ever “Patron of the Arts” with a generous endowment from the Rhimes Family Foundation. This month, IAMA was honored to co-host the fifth annual Stage Raw Awards ceremony.

About the Under 30 playwrights:

Laura Donney is a writer and native Angeleno who returned to Hollywood after graduating with a BFA in acting from NYU’s Tisch School of the Arts. She was a producing fellow for the Arts Education organization Story Pirates before working as a writer’s assistant under Showrunners Joan Rater and Tony Phelan. In 2017, Laura sold her first original spec pilot, Ghosting, to Freeform, which she then adapted into a television feature set to air this fall, starring Aisha Dee, Kimiko Glenn, Kendrick Sampson and Missi Pyle. In 2018, Laura partnered with Lisa Kudrow and Dan Bucatinsky’s company “Is or Isn’t,” as well as with Sony Television to develop Co-Oped, a workplace comedy set in a food Co-Op.  Most recently, Laura was hired as a staff writer for Wandavision, an Avengers spinoff series (starring Elizabeth Olsen and Paul Bettany) from Marvel Studios for Disney+. Laura was promoted to story editor during her time in the room.

Max Friedlich is a playwright and TV writer from New York City currently based in Los Angeles. In theater, he is a two-time winner of the Blank Theater Young Playwrights Award as well as the Stephen Sondheim Young Playwrights Award for New York City. In 2012, he was the youngest writer to present at the New York International Fringe Festival where his play SleepOver was selected for the Fringe Encore Series. Other New York productions and workshops include: White Girl Wasted (Less Than Rent Theater); Frat Boy: The Musical (The Bowery Poetry Club); Egg (Young Gotham Artists); and Black Ice (G45 Productions). His work has also been produced at Ithaca College, Northwestern University and Sarah Lawrence College. In July of 2017, he was an artist in residence at New York Stage and Film’s Powerhouse Theater. He and his producing partner, Hannah Getts, have produced multiple readings of new work in New York and L.A through their company Bad People. He has been profiled by NY Press and the Daily Beast and was chosen to represent “the American man at 18” in Esquire Magazine’s 80th Anniversary edition. For film and TV, he is currently developing two pilots at FX and a feature for Felix Culpa Productions. Recently, he served as head of video for Brud, an L.A.-based storytelling studio and the creators of Lil Miquela (named as one of Time magazine’s Most Influential People on the Internet) as well as writing for the Snapchat series SOLVE.

Ken Greller is a playwright and a screenwriter. His plays have been developed with the Sundance Institute, Great Plains Theater Conference and Clubbed Thumb. His play Troll was the inaugural production of the Rushline Company in Long Island City, NYC and earned him a spot on the Young & Hungry List. He has held residencies at the MacDowell Colony, Ucross Foundation, SPACE on Ryder Farm and the O’Neill Theater Center. In television, Ken is writer for the upcoming Apple TV+ series Dickinson starring Hailee Steinfeld and created by Alena Smith.

Madeline Hendricks is a playwright and TV writer. She currently writes on Freeform’s Good Trouble. Prior to that, she worked on the CW’s Jane The Virgin for all five seasons. Her work has been published by Samuel French, and her plays have been produced in N.Y. through the Fidelity FutureStage Playwriting Competition and the Samuel French Off-Off Broadway Short Play Festival. She’s also the co-creator of See What Sticks, a monthly workshop with an audience where L.A. artists of all disciplines come together to present works in progress.

Nicholas Pilapil is a Filipino-American playwright. His plays have been developed/performed with Artists at Play, Becky and Baldwin, East West Players, Fountain Theatre, Fresh Produce’d LA, Playwrights Foundation and the Vagrancy. His musical comedy Before and After was the winner of the Fountain Theatre’s Rapid Development Series. Nicholas’ short films have played at the Los Angeles Asian Pacific Film Festival, Los Angeles Philippine International Film Festival and Outfest FUSION, among others.

Adriana Santos is an actor and writer. She holds a BFA in Drama and Creative Writing from NYU’s Tisch School of the Arts and an MFA in Playwriting from the Writer’s Foundry at St. Joseph’s College in Brooklyn. Essays, short fiction and criticism by Adriana have been published on various online platforms. Her plays have been presented at NYU Tisch’s Experimental Theatre Wing, INTAR Theatre, Playwrights at the Grand, the Zurich University of the Arts and the Stockholm Academy of Dramatic Arts. Most recently, Adriana appeared as a series regular in a pilot for Showtime called Hombre, directed by Jonás Cuarón and starring Gael García Bernal.