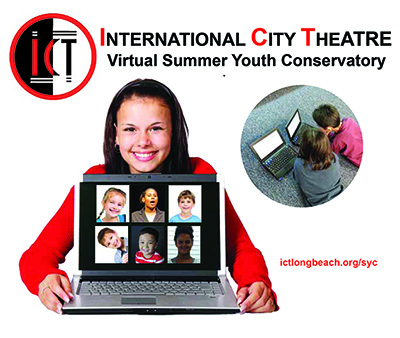 International City Theatre is making a limited number of scholarships available for those who need assistance.

“Although the two sessions will be similarly structured, the content will be different,” she explains. “Children can sign up for either one or two sessions; those who decide to take both will have a chance, in the second session, to further develop what they learn in session 1. Although our focus is on acting, playwriting and storytelling, they will also learn to think creatively, use their imaginations, and work as a team — skills they will need regardless of the field they pursue in life.”

Vildosola has an extensive background teaching children, both in class and virtually, and is skilled at keeping them engaged with creative and exciting acting challenges. His own acting career began at age three, doing commercials while also appearing in a children’s variety show, Via Alegre. He is a founding member of the Cerritos College Generic Improvisational Peep Show, which boasts alumni including Steve Carell, and is a member of the Orange County Crazies. He is fluent in English, Spanish and American Sign Language.

The cost of each session is $200.00, or $375.00 for both. A limited number of scholarships are available for those who need assistance. Register online at ictlongbeach.org/syc.