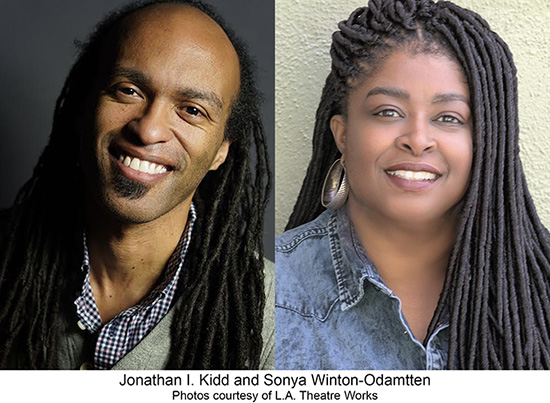 “LATW’s mission of using new technology to make world-class theater accessible to the widest possible audience, while also expanding the use of theater as a tool to make a positive difference in the world, is in perfect alignment with our creative philosophy,” state Kidd and Winton-Odamtten. “Our only goal is to build upon the fecund, innovative legacy that LATW board members have established, as societal interventionists, and work in partnership with them to expose new generations to their rich and necessary tradition.”

Professors, playwrights and documentarians, Kidd and Winton-Odamtten are best known as writer/producers for HBO’s genre-busting limited series “Lovecraft Country,” which was the recipient of 18 Emmy nominations, including for best drama series. Following that success, the pair extended their overall with HBO for four years to develop new projects, including the limited series “Say Their Names,” which examines the Grim Sleeper murders from the perspective of Bajan-American human rights activist Margaret Prescod. Through their philanthropic work, Kidd and Winton-Odamtten launched the Feed Black Covid-19 Health Workers Challenge. After partnering with Frontline Foods, the duo recruited over 40 other Black Hollywood writers to support health care workers in underserved Black communities around the country.

L.A. Theatre Works stands apart in its approach to making great theater widely accessible and affordable, bringing plays into homes and classrooms of millions of theater lovers, teachers and students each year. LATW’s syndicated radio theater series broadcasts weekly on public radio stations across the U.S. and daily in China on the Radio Beijing Network. The L.A. Theatre Works catalog of over 500 recorded plays is the largest archive of its kind in the world. According to AudioFile magazine, “L.A. Theatre Works sets the gold standard for fine audio theater recordings.” The Philadelphia Inquirer calls L.A. Theatre Works “a national theatrical treasure.”