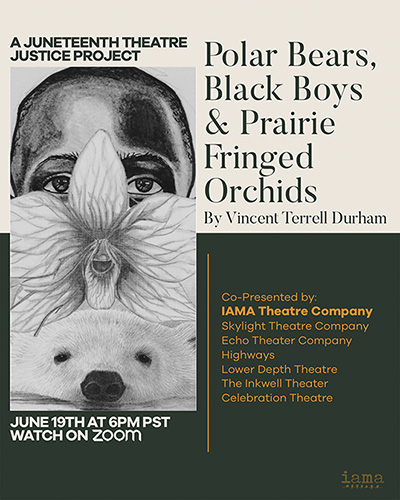 The collaboration is part of the Juneteenth Theatre Justice Project, a nationwide movement by American theater companies striving to “change the world, one play at a time” in response to the current civil uprising in reaction to the murders of George Floyd, Breonna Taylor, Ahmaud Arbery and countless others before them.

In Polar Bears, Black Boys & Prairie Fringed Orchids, a liberal white couple opens the doors of their renovated Harlem brownstone to host a cocktail party for a Black Lives Matter activist, his gay white lover and the mother of a slain 12-year-old Black boy. A night of cocktails and conversation sparks emotional debates on topics ranging from underweight polar bears and Lana Turner to saving the planet, gentrification, racial identity and protecting the lives of Black boys.

According to Aldo Billingslea, who launched the Juneteenth Theatre Justice Project to center Black theater artists and new voices and address systemic racism in the theater industry, this joint effort between theaters is exactly what theater is meant to do: unite for change, respond to the current moment, raise awareness and resources to support marginalized communities, and amplify the voices of artists of color. “With a perfect blend of wit, pathos and humor, [Polar Bears] speaks to some of the most pressing subjects of our time — gentrification, white fragility, the sustainability of the planet, the Black Lives Matter movement and police violence against Black bodies,” he said in a press release.

The play was co-commissioned and developed by PlayGround and Planet Earth Arts and was a finalist for the 2019 NNPN National Showcase of New Plays.

Durham is a Los Angeles-based scriptwriter, author and poet and the author of ten plays, including The Fertile River, about the tragic history and legacy of eugenics in North Carolina, and A Post Racial America.