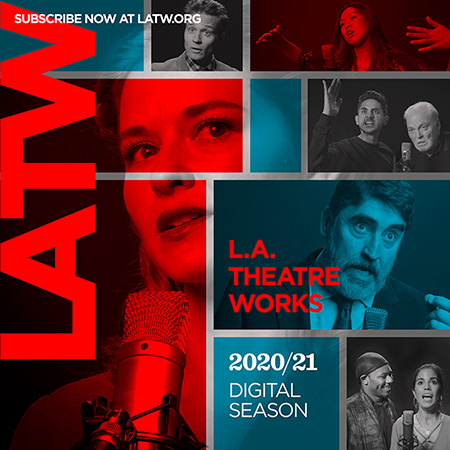 All plays in the 2020-21 season are being recorded in-studio, using state-of-the-art technology.

Each of the recordings will include bonus features, such as interviews with the playwrights, actors, experts in the field and more.

Subscriptions to the entire series can be purchased as soon as the first play goes on sale. Subscribers to the full series will receive additional extras throughout the season, including a special video conversation with founding members Edward Asner, Richard Dreyfuss, Hector Elizondo, Stacy Keach, Marsha Mason and JoBeth Williams.

The 2020-21 Digital Season recordings will be released on the following schedule:

Nov. 18, 2020:
The Thanksgiving Play by Larissa FastHorse — Liza Weil (Gilmore Girls, How to Get Away with Murder) and Josh Stamberg (Drop Dead Diva, Parenthood, The Affair) star in the newest L.A. Theatre Works state-of-the-art audio recording, a biting satire by newly-named MacArthur Fellow FastHorse. A roast of well-meaning political correctness, The Thanksgiving Play puts the American origin story in the comedy-crosshairs: Three “woke,” white thespians are tasked with devising an elementary school pageant about the first Thanksgiving, while avoiding any culturally appropriative missteps. The cast also features LATW regulars Ellis Greer and Mark Jude Sullivan. Directed by Rosalind Ayres, the LATW recording, which will be released just in time for the holiday, will include a virtual interview with playwright Larissa FastHorse by LATW producing artistic director Susan Albert Loewenberg.

Dec. 16, 2020:
Life on Paper by Kenneth Lin — Sarah Drew (Grey’s Anatomy, upcoming Freeform drama Cruel Summer) and Seamus Dever (Castle) star in Lin’s inspired-by-a-true-story play. How much is one life worth? When a billionaire dies in a plane crash, a forensic economist butts heads with a small town actuary over the exact value of one man’s life The cast also features Kevin Daniels (Coop and Cami Ask the World, Council of Dads, Modern Family), Summer Spiro (Platonic) and Mark Jude Sullivan (Michael Wakins). The recording was directed by Rosalind Ayres. Life on Paper, a finalist at the Eugene O’Neill National Playwrights Conference, is part of L.A. Theatre Works’ Relativity Series of science-themed plays, with lead funding provided by the Alfred P. Sloan Foundation, bridging science and the arts in the modern world.

Jan. 27, 2021:
Extinction by Hannie Rayson — Sarah Drew and Seamus Dever are back, alongside Joanne Whalley (Daredevil on Netflix, The White Princess on Starz, Showtime’s The Borgias), in Australian playwright and newspaper columnist Hannie Rayson’s play about the urgent need to combat man-made climate change to protect biodiversity. A zoologist in Australia gets funding to save an endangered species from the very company that threatens its existence. Will this deal with the devil allow her to save the species, or will it destroy her entire life’s work? Extinction is directed by Martin Jarvis and is also part of the Alfred P. Sloan Foundation-funded Relativity Series of science-themed plays.

March 10, 2021:
Bump by Chiara Atik — What not to expect when you’re expecting! Based on the true story of Jorge Odón and the birthing device he invented in his garage, Chiara Atik’s comedy spans time and space in an effort to grapple with the mystery and the miracle of maternity. Rosalind Ayres directs Ana Ortiz (Hulu’s Love, Victor; Ugly Betty; Devious Maids), Herbert Sigüenza (Culture Clash) and Alma Martinez (Gentefied, The Terror) in the L.A. Theatre Works recording, also a Relativity Series science-themed play. Also in the cast are Lucy DeVito, who was in the original cast of Bump, as well as Anna Lyse Erikson, Anna Mathias, Andre Sogliuzzo, Devon Sorvari, Inger Tudor and Moira Quirk. According to The New York Times, “In centuries-spanning ‘Bump,’ it’s always Labor Day… If you are pregnant, if you have been pregnant, if you have resulted from a pregnancy, you will probably find [Bump] very funny… If you are a mother, “Bump” is guaranteed to give you flashbacks as to how you became one.”

April 26, 2021:
A Weekend with Pablo Picasso, written and performed by Herbert Sigüenza — Best known for his work with performance troupe Culture Clash, Herbert Sigüenza is also a visual artist. In this one-man tour-de-force based on Picasso’s writings, Sigüenza takes on the role of the legendary artist, inviting the audience into Picasso’s private studio for an intimate and revealing weekend as he prepares to deliver six new works to a buyer on Monday morning. The San Francisco Chronicle calls the show “Touching and provocative… funny… [a] thoroughly engaging portrait of boundless genius in a flawed man.” The release of the LATW recording marks the anniversary of the bombing of Guernica, the inspiration for what is perhaps Picasso’s most famous painting, which took place on April 26, 1937.

May 5, 2021:
For Us All by Jeanne Sakata and No-No Boy by Ken Narasaki — L.A. Theatre Works is proud to release two new recordings sponsored by the California Civil Liberties Public Education Program, a state-funded grant project of the California State Library. In the L.A. Theatre Works-commissioned For Us All, the world premiere of a remarkable true story, an experienced civil rights lawyer teams up with a group of young Japanese-American attorneys to use a little known legal writ to overturn the convictions of men unjustly sentenced for resisting the Japanese-American internment. While the government uses every tactic to make the case go away, the lawyers and their defendant, Fred Korematsu, insist on nothing short of justice. No-No Boy, Narasaki’s adaptation of the novel by Japanese-American author John Okada, is set during the aftermath of the U.S. government’s incarceration of 120,000 people of Japanese descent during World War II and the resettlement of Japanese Americans to the West Coast. In the play, Ichiro returns to Seattle, where he struggles to transition into post-war life.

June 2, 2021:
A Good Day at Auschwitz by Stephen Tobolowsky — The extraordinary true story of Abe, a man the playwright met at his synagogue. Abe was a fellow of great humor and heart who not only survived three years at Auschwitz — certainly the worst place on earth — but fell in love there. Abe’s life speaks to the resilience of the human spirit, renewal and hope, even when there seems to be none. Starring Alan Mandell as Abe and Stephen Tobolowsky as himself.

June 30, 2021:
World premiere of The Murder on the Links, adapted from the Agatha Christie novel by Kate McAll — In this new, L.A. Theatre Works-commissioned adaptation of the Agatha Christie “whodunit,” detective Hercule Poirot receives an urgent letter from Paul Renauld, summoning him to France. When he arrives, Poirot and his companion Hastings find they are too late to save M. Renauld, as he now lies dead, face down in a grave on the edge of the golf course he was building. Certain facts do not add up, and the case is further complicated by the discovery of another body, which has apparently been stabbed in an impossible way.

L.A. Theatre Works stands apart in its approach to making great theater widely accessible and affordable, bringing plays into homes and classrooms of millions of theater lovers, teachers and students each year. LATW’s syndicated radio theater series broadcasts weekly on public radio stations across the U.S.; daily in China on the Radio Beijing Network; and weekly on KCRW Berlin 104.1 FM, Berlin’s English language public radio station. The L.A. Theatre Works catalog of over 500 recorded plays is the largest archive of its kind in the world. The Philadelphia Inquirer calls L.A. Theatre Works “a national theatrical treasure.”

For more information, to subscribe to the L.A. Theatre Works 2020-21 Digital Season, or to purchase individual titles, go to www.latw.org.