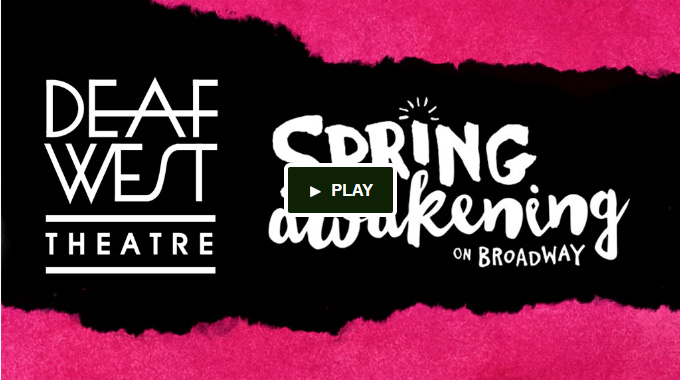 NEW YORK (May 24, 2016) — Deaf West Theatre (Artistic Director David J. Kurs), whose acclaimed production of Steven Sater and Duncan Sheik’s Spring Awakening was nominated for three 2016 Tony Awards including Best Revival of a Musical, has announced a crowd funding campaign to support the cost of rehearsing and performing on the 2016 Tony Awards, which are broadcast live on CBS on Sunday, June 12 from 8:00-11:00pm EST.

Supporters of Deaf West Theatre can visit www.GetSpringOnTheTonys.com to read more about this unprecedented initiative and to support Spring Awakening’s journey to the stage of the Beacon Theatre. Contributions to Deaf West Theatre’s Kickstarter are tax deductible thanks to Kickstarter’s policies accommodating 501(c)(3) organizations.

“The past few weeks have been a thrill for Deaf West and everyone at Spring Awakening. We are not in the business of theater-making for awards recognition, but being recognized and remembered by the Broadway community, particularly in this season of diversity, is something to treasure,” said D.J. Kurs, artistic director of Deaf West Theatre.

“Our journey to Broadway originally began with a Kickstarter, which funded rehearsals in a tiny church in North Hollywood and performances at the 99-seat Inner City Arts’ Rosenthal Theater in Los Angeles. Now, as a non-profit, Deaf West is looking to our fervent supporters, many of whom supported Spring Awakening’s acclaimed limited run on Broadway, to reunite our far-flung cast for this once-in-a-lifetime opportunity to perform for the world on the Tony Awards broadcast. There’s just one night a year that theater gets this platform. Our performance will be an undeniable statement to the world that theater is for everyone.”

The production was performed simultaneously in American Sign Language and spoken English by a cast of 28. The show began previews on September 8 and opened for a limited engagement on September 27; upon closing it had played 23 previews and 137 regular performances. Plans for a national tour to begin in 2017 have been announced.

• The New York Times called it “Thrillingly inventive. A first-rate production of a transporting musical, directed with remarkable finesse by Michael Arden.”
• Associated Press said “The staging is brilliant” and that “Little can contain Deaf West’s electrifying version of Spring Awakening. An exhilarating and fluid hybrid of song, word, dance and sign—and a sheer triumph for director Michael Arden and choreographer Spencer Liff.”
• Newsday called it “Revelatory and moving. Both visually and musically impressive. An original all its own.”

Spring Awakening opened to rave reviews from critics and audiences alike and ushered a new kind of diversity onto Broadway:

• Cast member Ali Stroker was the first person on Broadway in a wheelchair.
• It was the first Broadway show to conduct its ticket lottery in American Sign Language.
• The production performed at The White House as part of an event titled “Americans with Disabilities and the Arts: A Celebration of Diversity and Inclusion.”
• The producers were honored by the New York City Mayor’s Office for People with Disabilities with the Champions of Change Award.
• The production hosted a Discussion on How to Make Broadway More Accessible, highlighted by remarks from keynote speaker Timothy Shriver, Chairman of the Special Olympics and an update on the Broadway League’s accessibility initiatives from Charlotte St. Martin.

Spring Awakening came to Broadway following an extended, critically-acclaimed engagement at the Wallis Annenberg Center for the Performing Arts in Los Angeles where the show was expanded from its original, sold-out run at the Rosenthal Theater in downtown L.A.

Based on Frank Wedekind’s controversial 1891 expressionist play of the same name and featuring an electrifying pop/rock score, Spring Awakening follows the lives of a group of adolescents as they navigate their journey from adolescence to adulthood in a fusion of morality, sexuality and rock & roll. An extraordinary creative team including Michael Arden and Spencer Liff has reinvented the groundbreaking musical about lost innocence and the struggles of youth in true Deaf West style.