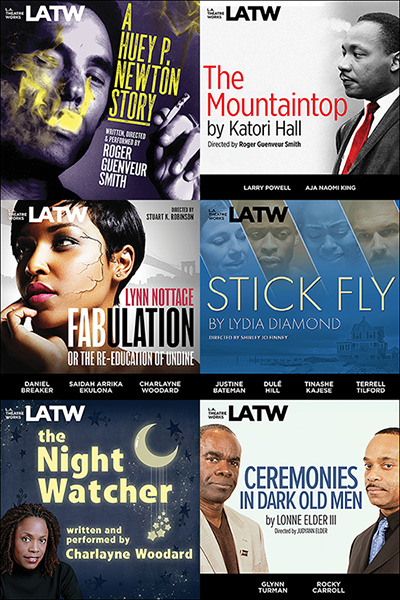 LOS ANGELES (June 19, 2020) — L.A. Theatre Works, the world’s leading producer of audio theater, has chosen six titles by Black playwrights from its extensive collection of work to stream free on its website. The six plays, including A Huey P. Newton Story, written, directed and performed by Roger Guenveur Smith; Ceremonies in Dark Old Men by Lonne Elder III; Fabulation, or The Re-Education of Undine by Lynn Nottage; The Mountaintop by Katori Hall; The Night Watcher, written and performed by Charlayne Woodard; and Stick Fly by Lydia R. Diamond, are available to stream free of charge at https://latw.org/black-voices, now through Aug. 30.

The LATW recording of A Huey P. Newton Story preserves Roger Guenveur Smith’s brilliantly-imagined, Obie Award-winning exploration of the life of the controversial Black Panther leader through a series of improvisations based on his own words and writings.

In Ceremonies in Dark Old Men, a Harlem family dreams of a better life, but pursues it in tragic ways. First produced by the Negro Ensemble Company in 1969, this modern classic opened the door for a new generation of African American playwrights, including August Wilson and Lynn Nottage. The LATW cast is headlined by Rocky Carroll and Glynn Turman.

Fabulation is two-time Pulitzer Prize-winner Lynn Nottage’s satirical tale about a successful African-American publicist (Charlayne Woodard) who stumbles down the social ladder after her husband steals her hard-earned fortune. Broke and pregnant, Undine is forced to return to her childhood home in the Brooklyn projects, where she must face the challenges of the life she left behind.

The Mountaintop is Katori Hall’s gripping, slyly humorous, Lawrence Olivier Award-winning re-imagining of events as they might have taken place at the Lorraine Motel on the night before the assassination of Dr. Martin Luther King, Jr. The LATW recording stars Aja Naomi King and Larry Powell.

In her acclaimed one-woman show The Night Watcher, playwright/performer Charlayne Woodard tells the story of a woman who chooses not to have children — only to be pulled into the real-life struggles of kids of all ages, races and backgrounds.

“Even as we are drawn into the great stories and characters, these plays expand our knowledge and awareness of the Black experience,” says L.A. Theatre Works producing artistic director Susan Albert Loewenberg. “It is our pleasure to be able to provide free access to these state-of-the-art recordings to students, teachers and the general public.”

Go to https://latw.org/black-voices to streamline these titles for free, now through Aug. 30.