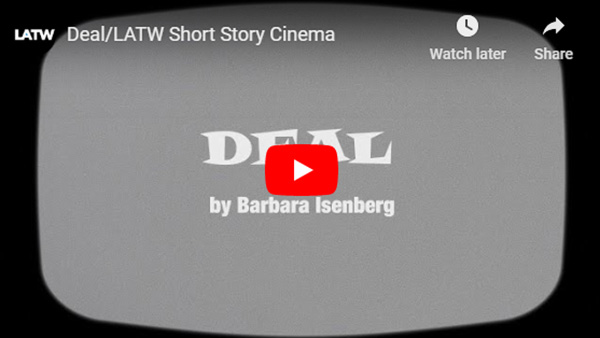 LOS ANGELES (May 27, 2020) — What happens when you want something so badly, you step out of reality to get it? L.A. Theatre Works presents Deal by Barbara Isenberg, a delightfully funny and surreal eight-minute foray into “short story cinema” starring Sean Astin and Sarah Drew. Deal premieres today on the L.A. Theatre Works youtube channel at youtube.com/watch?v=o8xe86id40w&feature=youtu.be

Originally published as a magazine piece, Isenberg’s Twilight Zone-esque tale introduces us to Marsha, a middle-class housewife who lives vicariously through the world of TV game shows. Astin and Drew bring the short story to vivid life — without changing a single word.

“This is not an adaptation,” notes LATW producing artistic director Susan Albert Loewenberg. “Sarah and Sean perform the story, word for word, in a creative new way that infuses it with an infectious vitality. It’s tremendous fun.”

“In all my years as a writer, nobody ever turned any of my articles into short films, much less with talent at the level of Sarah’s and Sean’s,” laughs Isenberg, an award-winning author and journalist. A former staff reporter for the Wall Street Journal as well as for the Los Angeles Times, where she remains a frequent contributor, Isenberg’s books include the best-sellers “Conversations with Frank Gehry” and “Tradition!: The Highly Improbable, Ultimately Triumphant Broadway-to-Hollywood Story of Fiddler on the Roof, the World’s Most Beloved Musical.” “Tradition” was produced as in audio book in 2016 by L.A. Theatre Works, voiced by actor Adam Grupper who was appearing in Bartlett Sher’s acclaimed Broadway revival of Fiddler at the time.