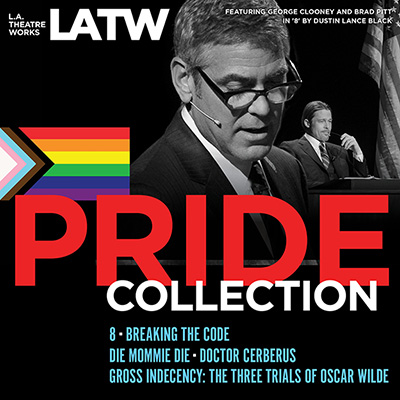 “This year, Pride celebration arrives during what seems to be a turning point in American democracy,” says LATW producing artistic director Susan Albert Loewenberg. “These important plays highlight injustice and seek to promote diversity and acceptance.”

In 2008, California’s Proposition 8 stripped the freedom to marry away from gay and lesbian couples. “8”, Dustin Lance Black’s powerful dramatization of the legal challenge to that proposition, is recorded by a star-studded cast headed up by George Clooney, Brad Pitt and Martin Sheen. Sponsored by the American Foundation for Equal Rights and Broadway Impact, “8” was recorded before a live audience at the Wilshire Ebell Theatre in Los Angeles. The final recording includes exclusive interviews with the playwright, director Rob Reiner and lead attorneys for the plaintiffs, David Boies and Theodore B. Olson, as well as a backstage cast interview montage.

In three short months, Oscar Wilde, the most celebrated playwright and wit of Victorian England, was toppled from the apex of British society into humiliation and ruin. In Gross Indecency: The Three Trials of Oscar Wilde, playwright Moisés Kaufman ignites an incendiary mix of sex and censorship with a cast of characters ranging from George Bernard Shaw to Queen Victoria. Drawing from trial documents, newspaper accounts and writings of the key players, the audio play features Dakin Matthews, Peter Paige, Julian Sands and John Vickery and includes an interview with the playwright.

Breaking the Code by Hugh Whitemore tells the story of brilliant mathematician Alan Turing, the man who cracked the German Enigma code and enabled the Allies to win World War II. Shortly after, Turing was to find that the country he saved cared less about his genius and more about his sexual orientation.

Doctor Cerberus is Roberto Aguirre-Sacasa’s coming-of-age, coming-out cocktail with a twist of zany terror. Thirteen-year-old Franklin Robertson (Simon Helberg) is just trying to survive adolescence. His parents don’t understand him, his brother torments him, he has no friends, and he’s more interested in the high school quarterback than any girl. The one bright spot in his life is the glow of the black-and-white TV in his parents’ basement. Here, he worships at the altar of the Saturday Night Horror Movie, hosted by the eerie Dr. Cerberus. Before long, Franklin is convinced that only by going on the show will his life be redeemed—by Dr. Cerberus himself.

Finally, take a break with Die Mommie Die, a hilarious camp send-up in which tongues aren’t the only thing dipped in acid, stars Charles Busch in the role he originated off-Broadway. Angela Arden (Busch) wants to be free of her suffocating marriage to film producer Sol Sussman. What better way than poison! Distraught by her father’s death and convinced of her mother’s guilt, Edith Sussman plots to get the truth out of Angela using any means necessary.

Each of the titles in the L.A. Theatre Works Pride Collection can be downloaded as an mp3 digital file for $4.99, and is also available for purchase as a CD.

For more information, go to https://latw.org/pride.