50th Anniversary ‘Circa ’69!’ Season will revive seminal plays
from the period during which Odyssey Theatre was created 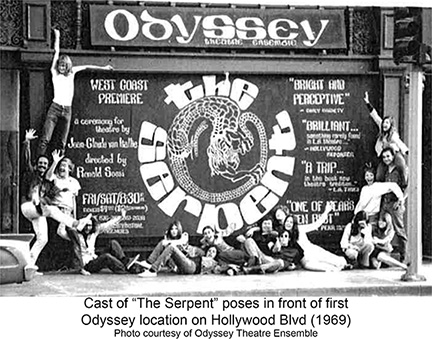 LOS ANGELES (May 13, 2019) — Odyssey Theatre Ensemble has announced “Circa ’69!” an 18-month retrospective beginning in June, 2019 that will celebrate its founding, 50 years ago, by artistic director Ron Sossi, who has remained steadily at the helm since the company’s first production in 1969.

The company has announced the first five out of a total of ten productions of significant, adventurous works from the U.S and abroad that premiered around the time of the Odyssey’s inception — plays that inspired the raison d’etre and style of not only the Odyssey, but of countless other companies that sprang up in America and internationally at that unique moment in time. The remainder of 2020 is still in the planning stages.

“Circa ’69!” will kick off this June with English “bad boy” Joe Orton’s Loot. A bank heist, a corpse and a crazy cast of characters — Orton’s tour de force of bad taste, taboos and high farce continues to shock and delight five decades later. Loot will open on June 8, directed by Bart DeLorenzo, and continue through Aug. 10.

Following Loot, Denise Blasor will direct Fefu and her Friends by María Irene Fornés. This signature work of early feminist theater by a giant of the avant-garde is a splendidly surreal comedy-drama that will be performed in multiple spaces in the Odyssey complex. Performances will take place Aug. 3 through Sept. 29.

Opening in September, director David Schweizer will helm the Obie award-winning musical In Circles, adapted by composer Al Carmines from A Circular Play by Gertrude Stein. A landmark in the “over the top” gay scene in New York of the late ’60s, the play was described by the Burns Mantle Yearbook as “a complete arrangement of words and song and dance effects, each one conceived as if describing its own circle, without convention, story or subject line.” In Circles will open on Sept. 7 and continue through Oct. 27.

A brief respite in the productions of “Circa 69!” for the holidays will feature the return of popular avant-garde Irish writer/performer Pat Kinevane with his newest work, Before, running Nov. 14 through Dec. 8.

The beginning of 2020 will see a re-envisioning of the Odyssey Theatre’s 1969 West Coast premiere of Jean-Claude van Itallie’s experimental The Serpent, which will play from March 7 through April 26, 2020. This will be the only play in the season that has been previously produced by the Odyssey — a unique work, originally created as a collaboration with New York’s famous Open Theatre, The Serpent was the company’s second production. Fifty years later, Ron Sossi will again take the helm of this “ceremony/celebration/exploration” that remains a prime example of the innovative nature of the period.

April will see A Day in the Death of Joe Egg by Peter Nichols, directed by Robin Larsen. One of the groundbreaking plays of the ’60s and a continuing audience favorite, Joe Egg is an incisive, wonderfully theatrical examination of the private language of a marriage and the ways that it enriches and destroys. Peter Nichols’ most famous play, this semi-autobiographical portrait of a couple who must come to terms with having a disabled child is included on the National Theatre’s list of the “100 Most Significant Plays of the Twentieth Century.” The run is set for April 18 through June 7, 2020.

The final five productions of this special “Circa ’69!” season will be announced later this year. Projects under consideration for 2020 include works by Sam Shepard, Peter Weiss, Le Roi Jones (aka Amiri Baraka), Megan Terry, David Rabe and Athol Fugard, as well as the seminal rock musical, Hair.

“Circa ’69!” will also include seminars, workshops and special performances with original creators, playwrights, actors and directors from New York, Europe and Los Angeles who were unique influences during this most adventurous period in American theater.

Founded in 1969 when Sossi decided to demonstrate that experiment-oriented theater could have populist appeal and be fiscally solvent while maintaining the highest artistic standards, the Odyssey continues to explore, produce and present works on the forefront of contemporary theater art in its three-theater complex in West Los Angeles.