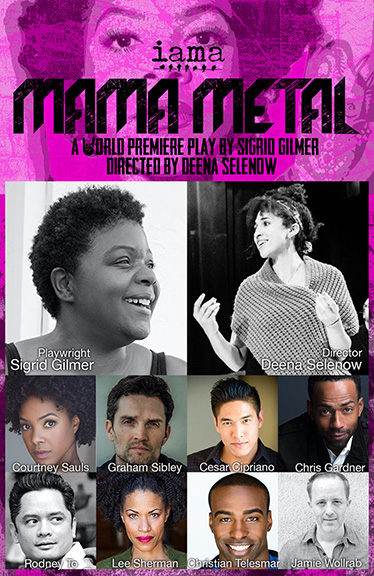 LOS ANGELES (April 23, 2019) — A love letter to those who shape our lives, hold us together and break our hearts. IAMA Theatre Company presents the world premiere of Mama Metal, a joyfully irreverent black comedy by 2017 Humanitas Play LA award-winner Sigrid Gilmer that entwines issues of identity with pop culture icons to tell a truly unique mother-daughter story. Deena Selenow directs for a May 23 opening at Atwater Village Theatre, where performances will continue through June 23. Low-priced previews begin May 17.

Courtney Sauls (IAMA’s Sinner’s Laundry, Little Children Dream of God at the Road) stars as Sterling Milburn, whose mother — played by Lee Sherman (artistic associate at Company of Angels, upcoming mini-series Paul Feig’s East of La Brea) — is dying. Sterling is falling apart. She tries to control her mounting panic by rewriting the past, which she does with the help of Demonic Afterbirth, “the world’s greatest heavy metal band” (portrayed by Chris Gardner, NAACP Award nominee for Sunset Baby at the Odyssey; Graham Sibley, recently seen in IAMA productions of Redline and Cult of Love; Rodney To, known for IAMA’s American Hero, Echo’s One of the Nice Ones, HBO’s Barry and NBC’s Parks and Recreation; and Jamie Wollrab, star of Tryptich Theatre’s Nocturne at Vs Theatre). Also there to mentor Sterling are two titans of the American Theatre, Eugene O’Neill and Tennessee Williams (Sibley and Wollrab), whose Long Days Journey into Night and The Glass Menagerie may be two of the world’s most iconic “mama dramas.” But when Mom refuses to follow the script and begins her own revision of their history, Sterling must learn to drop the stories and let Mom go. Also in the cast of this funny, often surreal memory play are Cesar Cipriano (Chess, Be Like Water, Pippin at East West Players) and Christian Telesmar (Friends with Guns at the Road) as “Blue” and “Pink” Orchid, the beautiful, rare, too-perfect-to-be-real fantasy men of Sterling’s fraught imagination.

“We knew as soon as we heard the first paragraph of this play read aloud at Play LA that we wanted to do it, and IAMA has spent the last two years developing it with Sigrid and Deena,” says Stefanie Black, who serves as co-artistic director of IAMA Theatre Company alongside Christian Durso and Katie Lowes.

According to Gilmer, Mama Metal unfolds like a dream — a loosely autobiographical, heightened and exaggerated reflection of her relationship with own her mother, who was diagnosed with Parkinson’s disease five years ago. “The play is about three things that framed who I am today, the ‘pillars of me’: my mom, heavy metal music and the American theater,” she explains.

“Parents are so much a part of their children that you can’t get away,” suggests Selenow. “Sterling can’t even succeed at telling her own story because it’s colored by her mother’s memories. Sterling’s a hot mess. Her mother was perfect.”

Sigrid Gilmer makes black comedies that are historically bent, totally perverse, joyfully irreverent and concerned with issues of identity, pop culture and contemporary American society. Sigrid burst onto the national theater scene with her play Harry and the Thief, an action film/historical/time travel play about a thief who is blackmailed into traveling back in time to deliver a cache of arms to Harriet Tubman. It has since been produced across the country, including runs at the Pavement Group (Chicago), Know Theatre (Cincinnati), and Skylight Theatre (L.A.). Additional select works include Slavey (Clubbed Thumb), Seed: A Weird Act of Faith, It’s All Bueno (Cornerstone Theater Company), Frilly and White 3: Manifestdestinyland. Her television work includes: A Series of Unfortunate Events  (Netflix) and Claws (TNT). Sigrid earned her MFA in Writing for Performance at Cal Arts, where she was mentored by Suzan-Lori Parks. She resides in Los Angeles.

Designated by Playbill as “one of 20 regional houses every theater lover must know,” IAMA Theatre Company is a Los Angeles-based ensemble of artists committed to invigorating live performance for a streaming generation. Through cutting-edge, cool and hyper-modern stories, IAMA is invested in the immediacy of production and strives to bring audiences out of their personal space and into a shared experience. Since its founding in 2007, the Ovation Award winning company has seen many plays generated at IAMA travel to off-Broadway, Second Stage and the Roundabout Underground, then go on to be performed regionally and internationally. IAMA members have been featured in numerous critically acclaimed TV shows and films as well as in a vast array of theater and live performances all over the country; last fall, IAMA co-artistic director Katie Lowes and her husband, founding IAMA company member Adam Shapiro, made their Broadway debuts in Waitress. In 2017, TV producer and creator Shonda Rhimes announced that she would become IAMA’s first-ever “Patron of the Arts” with a generous endowment from the Rhimes Family Foundation.

Mama Metal opens on Thursday, May 23 at 8 p.m., with performances thereafter taking place on Fridays and Saturdays at 8 p.m. and Sundays at 7 p.m. through June 23. Three preview performances take place May 17 through May 19 on the same schedule. All tickets are $35, except May 23 (opening night) for which tickets are $40 and include a post performance reception, and previews, which are $20. Atwater Village Theatre is located at 3269 Casitas Ave in Los Angeles, CA 90039. Parking is free in the Atwater Xing lot one block south of the theater. For reservations and information, call 323-380-8843 or go to www.iamatheatre.com.

WHAT:
World premiere of Mama Metal — This joyfully irreverent black comedy by 2017 Humanitas Play LA award-winner Sigrid Gilmer entwines issues of identity with pop culture icons to tell a truly unique mother-daughter story. Sterling Milburn’s mother is dying and Sterling is falling apart. She attempts to keep it together by rewriting the past with the help of two titans of the American theater and the world’s greatest heavy metal band — but Sterling’s mother refuses to follow the script. A love letter to those who shape our lives, hold us together and break our hearts

PARKING:
FREE in the Atwater Xing lot one block south of the theater.