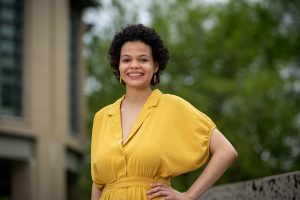 A series of films and plays that centers on the relationship between Latinx communities and the earth, Nuestro Planeta will focus on specific countries in Latin America, beginning with Colombia and Puerto Rico.

Diana Burbano, a Colombian immigrant living in the U.S., was previously announced by Hero as the initiative’s first commission.

Both the Colombian and Puerto Rican segments will be devised and directed by Hero founding artistic director Elisa Bocanegra.

Nuestro Planeta is the first collaboration between Hero Theatre and newly formed Hero Multimedia. The initiative was inspired by Bocanegra’s mentorship with Black Lives Matters co-founder Patrisse Cullors. Bocanegra is part of the second cohort of Cullors’ Environmental and Social Justice Arts program at Prescott College.

The mission of Hero Multimedia is to create and produce scripted film and television narratives around environmental and social justice issues.

Paloma Sierra has developed plays, musicals, and operas with various theater companies, including Project Y, Theatre Now New York, Poetic Theater Productions, and Nuyorican Poets Cafe. Her poetry and translations appear in “Bridge: The Bluffton University Journal,” “Persephone’s Daughters” and “Sampsonia Way.” Her screenplay Open Frame is a finalist for the Alfred P. Sloan Foundation Screenwriting Grant 2021. As the Emerging Poet Laureate of Allegheny County 2020-2021, she curated a virtual workshop series with City of Asylum. A Fulbright Scholar 2021-2022, Paloma plans to study theater translation in Buenos Aires, Argentina. Sierra is a member of the Dramatists’ Guild and New Play Exchange. She holds an MFA in Dramatic Writing and a BHA in Creative Writing and Drama from Carnegie Mellon University.

Diana Burbano is an Equity actor, a playwright and a teaching artist at South Coast Repertory and Breath of Fire Latina Theatre Ensemble. Her plays focus on female protagonists and social issues. Her play Ghosts of Bogotawas commissioned and debuted at Alter Theater in the Bay Area in Feb 2020. Sapience, was featured at Latinx Theatre Festival, San Diego Rep 2020. Fabulous Monsters, a Kilroys selection was to premiere at Playwrights Arena in 2020 (postponed). She is in the Geffen’s Writers Lab in 20-21. She has worked on projects with South Coast Repertory, Artists Repertory Theatre, Breath of Fire Latina Theatre Ensemble and Center Theatre Group and Livermore Shakespeare Festival. She is the current Dramatists Guild representative for Southern California.

Elisa Bocanegra is a Puerto Rican artist and the founder of Hero Theatre. Her work with Hero has been featured in the Los Angeles Times and American Theatre Magazine. Elisa won the prestigious TCG Leadership U Grant, the nation’s largest grant of its kind, for her work with HERO Theatre. This provided her the opportunity to be part of the leadership team at the Oregon Shakespeare Festival for two seasons. Her stage directing credits include Troy, a modern retelling of The Trojan Women about women and homelessness; Festival Irene: A Tribute to Playwright Maria Irene Fornés; The Floating Island Plays by Eduardo Machado. Elisa is mentored by Patrisse Cullors, co-founder of Black Lives Matter. In January 2021, it was announced that Elisa is part of the inaugural NEXUS Cohort at New York Stage and Film. This highly selective program asked the industry’s top professionals to nominate early career artists who they believe are the next generation of influencers in film and theatre. Elisa was nominated by a committee of Pulitzer-winning individuals for her work as an emerging director and producer.

For more information about the Hero Theatre and Hero Multimedia, go to www.herotheatre.org.